Reason and Society in the First Habermas 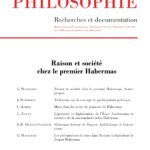 Gilles Marmasse, Reason and Society in the First Habermas. A Foreword

Jürgen Habermas, Reflections on the Concept of Political Participation

Jürgen Habermas writes “Reflections on the Concept of Political Participation” as the introductory chapter of Student and Politics, the resulting book of a survey conducted by the Institute for Social Research in Frankfurt to investigate the political disposition of Frankfurt University students.

This article examines the central role of Marxian theory in the writings of Jürgen Habermas prior to The Theory of Communicative Action. In contrast to the thesis asserting that Habermas’ approach to Marx differs from that of his predecessors at the Frankfurt School—Horkheimer and Adorno—we claim here that both generations converge in their confrontations and criticisms of Marx. Moreover, we highlight the unique role of Marx’s theory for the young Habermas to the extent that it provides essential elements to establishing a model of critical theory and a diagnosis of the present.

Clotilde Nouët, Legitimacy and Legitimation of the State: Founding and Exercising Sovereignty in Habermas

Does Habermas’ theory of “radical democracy” develop a consistent concept of popular sovereignty, which enables us to conceive the conditions of its exercise, beyond the legitimate foundations of power? This article aims to uncover the continuities and ruptures that affect Habermas’ political thought by focusing on his theory of the relation­ship between legitimacy and legitimation.

Despite Habermas’ opposition to Popper in The Positivism Dispute, the former takes a large part of his reading of Marx from the latter in order to paradoxically reconstruct Marxism. This is only possible thanks to a translation of the concepts of fallibilism and historicism into his own frame of reference, that of detranscendentalization, and thanks to a motivated choice for functionalism.

Gilles Marmasse, The Concept of Crisis according to Jürgen Habermas’ Legitimation Crisis

The paper explores the concept of crisis and its underlying theory of society in Jürgen Habermas’s Legitimation Crisis. Habermas understands crisis as the conjunction of troubles in regulation and troubles in socialization. His conception of society is alternately functionalist and normative. The article aims to show that both dimensions have in common a certain theoretical perplexity and nevertheless a resolute choice in favor of reason.