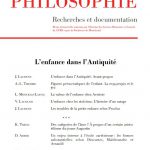 Anne-Laure Therme, Presocratic Figures of the Child. Συμμετρία  and Gaming

If Presocratic fragments first seem to depreciate the disordered and immature figure of the child, it’s mainly to criticize the obvious inability of some adults to act as such. Childhood is a state of germination appealing a beyond, not so much defined as a privation (of order, measure and reason) than as a promise of becoming which has to be fed by adults. A harmonious growth needs an education fitted to what children are and can, for συμμετρία causes ἁρμονίη, explaining the significant role of gaming, which allies pleasure with the respect of limits and the mastering of rules. The paradigm of the child as a forming κόσμος is reversed by Heraclitus (fr. 52) and Empedocles (fr. 100) when they invite us to understand the universe and the way to wisdom through puzzles involving children playing.

Despite its “naturalism”, Aristotle’s ethics does not emphasize the goodness of child. Not in accordance with nature (kata phusin), impulsive movements of child must be rectified. Obsessed by pleasure, child is almost intemperate by nature. Because childhood is rational and human only potentially, Aristotle just underlines its weakness. Child is pathologically weak, physically disproportionate, and above all irrational. He seems to be closer from animal than from a mature man. Examine childhood and its value leads us to explore what we call “naturalism” when we talk about Aristotle’s ethics.

Valéry Laurand, Childhood in Stoicism. An History of a Failure

For the Stoic philosophers, human beings are from their birth programed and provided consequently by nature. Paradoxically, a child, because he is an animal budding human, does not partake reason yet and, despite of the best possible education, can only become unreasonable and lack wisdom. In this paper, I aim to write the Stoic history of a failure: that of the child’s development into reasonable adulthood. I try to understand the reasons of the failure but also its necessity, from before childbirth to the – necessary – transformation in an “adult” phaulos, i.e. faulty, vicious, perverted, and insane.

Jérôme Laurent, Turmoils of Early Childhood according to Proclus

According to Proclus, the soul is not the entelechy of an organic body. It is different from the body it pre-exists. Therefore, Childhood is not a complete beginning but the transition period between two existences, the moment of the greatest turmoil when, at birth, the sensations lead to the oblivion of the previous live.

Kristell Trego, Are there Some Categories of the Soul? About the Aristotelism of the Young Augustine

This paper examines Augustine’s use of the Aristolelian categories to describe the human soul. We consider two dialogues written after his stay in Cassiciacum: the De immortalitate animae (and the idea that accidents are in a subject) and the De Quantitate animae (which deals with the soul’s substantiality and its quantity).

Dan Arbib, The Substantial Forms according to Descartes, Malebranche, and Arnauld

The question here is to question the radicality of the rejection of substantial forms in Descartes and his successors, notably Malebranche and Arnauld. After recalling the Cartesian motives of this rejection and the exception that constitutes the human body as linked to the soul – an exception which makes it possible to distinguish the features of a “critical Aristotelianism” proper to Descartes – (§ 1), we study its Malebranchist radicalization beyond the limits fixed by Descartes himself (§ 2); it remains for Arnauld only to confuse the “representative beings” and “substantial forms” to take Malebranche again in default (§ 3). Thus, far from being an evidence shared by the Cartesians, the rejection of substantial forms constitutes an internal stake in the Cartesian school.