Francis Bacon and the forms of experimentation: A reappraisal 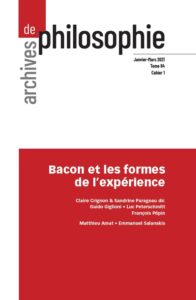 This article suggests that in approaching Francis Bacon’s Novum Organum, readers should bring into play specific strategies of inductive reading to better understand what Bacon meant by induction in that work, that is, an exercise in cognitive learning in which general inferences are built through the direct experience of things. Likewise, instruction in the Novum Organum comes from processing the specific elements of knowledge that are offered to the reader through the 184 aphorisms that make up the bulk of the text. At every turn, readers are encouraged to modify or at least tweak their attitude toward reality. What is more, and almost as an unintended consequence, they are also inducted into the knowledge concerning the ultimate constituents of being, for they discover that all things in nature, animate and inanimate, move following inductive strategies of survival in line with Bacon’s view that motions are appetites. In this way, the cognitive exercise of trial and error performed by the human mind can be seen as the result of a deeper motion of trial and error that is already occurring (and has been for some millennia) in matter.

Luc Peterschmitt, Bacon and the circle of experience

In this paper, my aim is to study why Bacon merely gives examples in order to justify the efficiency of the modes constituting experientia literata. The problem is the following: Bacon seems to consider that chance is what sparks invention. Yet I interpret this situation as the sign of Bacon’s pragmatism. As experientia literata begins the search for the truth, reason is necessarily inadequate: experientia literata is a tool built to explore what is unknown. Bacon nevertheless considers that its modes are ef  ficient, because they are already known: they have proved their value, so we know that they are fruitful practices. Thus, experientia literata is a kind of settled knowledge, a collective or common “experience” that everybody can use. Experientia literata is efficient because invention is always grounded in such knowledge.

François Pépin, The making of gold in the Sylva Sylvarum and the Novum Organum

The Sylva Sylvarum seems to follow a specific path that is distinct from the inductive method put forward in the Novum Organum. Yet the case of gold-making suggests that the approaches presented in these two texts are not completely different. The Sylva Sylvarum gives a more detailed account of the work of gold-making and focuses more on practical issues. However, in this text as well as in the Novum Organum, the operational aspects are linked to the search for the general causes of the process. Moreover, although the concept of “form” does not appear explicitly, the idea is present in the background. Thus, this paper argues that this example urges one to reconsider and qualify the opposition between the experientia literata proposed in Bacon’s natural histories and the inductive method of the Novum Organum.

Sandrine Parageau, Bacon, Boyle, and the writing of natural history

This article examines the rules for writing and presenting natural history according to Robert Boyle, with a view to showing how Bacon’s principles were both followed and revised in the late seventeenth century. The article first focuses on the way of writing experiments and observations, the description of which constitutes the main material of a natural history. The composition of books of natural history is then examined in its methodological, heuristic, and programmatic dimensions. Finally, the article inquires into the principle of collaboration in natural history and the way it is rendered in the writing and presentation of the texts here studied.

Claire Crignon, What is at stake in a natural history of the air? Francis Bacon and Robert Boyle

Imperceptible and difficult to observe, the air and winds are not apprehended by the mere use of instruments, within the closed space of the laboratory. Getting to know them requires qualities of memorization and observation, which travelers, merchants, and farmers may be more legitimately allowed to claim than experts and learned scholars. Starting from the presentation of the Baconian natural history project and its application to the specific case of the air and winds, this article examines the means used by the authors who claimed the Baconian legacy (Boyle, Hooke, Childrey, Plot) in order to overcome the obstacles to knowledge of the air and its effects on the development of diseases or the pursuit of health.

Matthieu Amat, Georg Simmel’s Nietzsche. A theorist of value and a “metaphysical moralist”

This text outlines Georg Simmel’s interpretation of Nietzsche’s philosophy of life and value. It offers elements for the understanding of Simmel’s philosophical project, as an effort to link objectivity and relativity of value. But one may also find reasons to defend a certain use of Nietzsche, whom Simmel places in a humanist lineage, but without the slightest anthropocentric naivety. We focus in particular on two of Simmel’s claims: (1) Nietzsche proposes an objective and systematic “theory of value”; (2) Nietzsche is a “moralist” who defends a peculiar variety of “personalism.”

This paper aims to shed light on the three 1888 texts that Nietzsche titled “Anti‑Darwin,” namely a section of Twilight of the Idols and two posthumous fragments. More precisely, my objective is to understand why the expression “Anti-Darwin” only emerged in 1888, considering that Nietzsche had already criticized Darwinism in his previous work, but without using this specific term. My claim is that the three “Anti-Darwin” texts are part of the project of a general transvaluation of values that characterized the year 1888.