Philosophy of photography. From the naturalistic print to the theoretical object 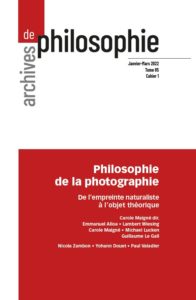 Carole Maigné, Philosophy of photography. From the naturalistic print to the theoretical object. Foreword

Promising both to capture the moment and to preserve it for eternity, the photographic medium sees its fate intimately linked to the category of time. This article suggests, however, that this inclusion of time in the image has been acquired, throughout the history of photography, at the cost of an essentialization of the momentary. In contrast to such an approach, the photographic image should be rethought as a result of accident, so that the photograph no longer represents the fertile instant, but the time of the accident, which corresponds rather to a death sentence, both announcing and postponing the end toward a future past.

Lambert Wiesing, Showing cause and effect: Faces and photographs

Is it the same to show emotions on a face or to show something in a photograph? What does it mean to show (,das Zeigen) or to make people see (,sehen lassen)? This question triggers a reflection on the nature of the photographic image: by refusing to make the photograph (as well as the face) the trace or the index of a something, the author affirms the importance of use for any artifact and the crucial role of language, where the linguistic equivalence of the dissimilar becomes a necessary aspect of the praxis that aims to point.

The “camera-reality,” a neologism qualifying the nature of the photographic medium, is a “theoretical object” that questions the irruption of the photographic image in philosophy. In Theory of Film, Siegfried Kracauer defines the realism proper to the photographic image, revisiting the concept of affinity, in a close discussion with the Kantian heritage that he knows so well: it is a question of redefining the aesthetic experience through recording, between detachment and redemption, with the hyphen between camera and reality signaling a conceptual effort that we consider remarkable.

Michael Lucken, The possibility and limits of a photographic philosophy. A reading of Nakai Masakazu

Based on the work of the Japanese philosopher Nakai Masakazu (1900–1952), this paper presents a conception of photography where technical development can be separated from the horizon of catastrophic ends. What emerges is the lineaments of a philosophy that can be literally described as photographic, which mixes schemas from Buddhism and Marxian reflection theory.

This article analyzes the work of Patrick Tosani by following the order of appearance of the series in order to underline the evolution of the artist’s reflection on photography. From a methodological point of view, the article privileges the analysis of the images and the devices set up by insisting on the reflexive dimension of the work. We discover how this process generates a thought on the nature of the images produced.

Utilizing Blumenberg’s critical analysis of Husserl’s phenomenology, this article aims to reconstruct and interpret the most important aspects of Blumenberg’s own phenomenological anthropology. Special attention is paid 1) to his critical confrontation with Husserl’s method; 2) to his theory of life-world, which accounts for the self-evident structures of meaning that shape everyday human experience, and whose historical configurations are addressed by Blumenberg.

Yohann Douet, Dialectics and the state: Gramsci, Hegel, and the Italian neo-idealists

After outlining Croce’s and Gentile’s “reforms” of Hegelian dialectics, I examine Gramsci’s critique of these conceptions. According to him, the neo-idealist thinkers, unlike Hegel, dismiss real contradictions—a dismissal linked in some respects to the logic of passive revolutions. I then turn to Croce’s and Gentile’s conceptions of the state. The liberalism of the first and the statism of the second are both too abstract for Gramsci, who is concerned with thinking about the state in its integral sense—that is, in its dialectical unity with civil society. For this purpose too, he considers it necessary to return to Hegel.

How are we to understand that the philosopher, Nietzsche, who claims to philosophize with a hammer, also exalted the sense of distance, of distinction, of nobility? To achieve this, a patient “rumination” of his writings is necessary to avoid classifying too quickly a thought that escapes any simple categorization. This article is particularly based on the text of The Genealogy of Morals.