Knowledge about the family 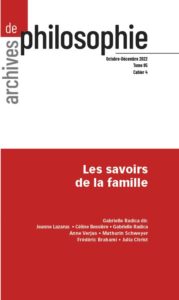 This article presents the work of Viviana Zelizer, outlining her understanding of the intertwining of family and economy through a series of objects: life insurance, the valuation of children, the social meaning of money, and more recently, intimacy. The various stages of Viviana Zelizer’s research are set out, with particular attention to the relational work carried out by the actors. The last part of the paper explores the repercussions of Zelizer’s work, which resonates around the world, in a time of difficult economic conditions that cast doubt on the possibility of establishing a family and creating the conditions for reproduction.

Rooted in sociology, this text aims to clarify the use of the concept of “family arrangements” in the French-speaking and English-speaking social sciences. It clarifies its relevance to the competing term “negotiation” to describe collective decision-making by family members. Family arrangements designate the oftentimes laborious and/or conflictual consensus-building process among relatives who may have contradictory interests, as well as the outcome of this process. The concept tackles situations with tensions that are not resolved by a unilateral imposition of one point of view (the law of the strongest) nor by a harmonious accord arising from family relations where everyone seems to agree (one common point of view). Arrangements require multiple people (they cannot be made by one person) and several points of view that need to be reconciled. From a temporal perspective, arrangements are never completely finished: making arrangements is a perpetual process that outlasts their legal and moral formalization, whose results are only temporary. This concept goes beyond the legal opposition between agreement and contention, by providing a more nuanced description of the social production of consensus, including when the latter is fragile and temporary.

The family is not merely an affective network or a contract: it is a social institution. As such, it is an object of law whose understanding requires recourse to legal thought. This is no easy task, since there are multiple legal bodies of knowledge about the family, and this knowledge resists both theorization and systematization. It remains nonetheless an indispensable task, as ignorance of this legal corpus leads to numerous abstractions and misconceptions. What sort of philosophy of the family would be able to account for these multiple forms of juridical knowledge, all the while respecting the complexity of its object? It would have to be a philosophy that was both social and institutionalist, one that draws on this legal corpus and relates it to wider social and political concerns.

The legislation of Year II (1793–1794) during the French Revolution, which for a very short time equalized the rights of natural and legitimate children, had unexpected and lasting effects on French law. Far from creating equality between all children, it increased the rights of their fathers without stipulating any new obligations, to the detriment of unmarried mothers and their unwanted and unrecognized children. The French Revolution maintained the power of patriarchy even in its most individualistic law and prepared the foundations for its institutionalization by the Civil Code.

Mathurin Schweyer, The genealogy of governing the family: Foucault and the political history of family authority

At the end of Surveiller et Punir, Foucault indicated that it would be important to study the revolutionary debates on the right of parents to have their children locked up, in order to build on his analysis of discipline as a “form of society.” This article proposes to study these debates, by retracing the way in which family authority was constituted as a form of power and an object of knowledge, between the end of the eighteenth century and the beginning of the nineteenth century in France. The analysis of legal, pedagogical, and political discourses on family authority allows us to retrace the emergence of a new form of governmentality, whose specificity can only be apprehended if one moves from a genealogical approach to a socio-historical perspective on the relations between the groups in conflict within society. Considering this assessment, the problem of the relationship between the method of “historical-philosophical practice” and the method of socio-historical inquiry can be reexamined.

The arguments Proudhon develops about women, love, and wedlock are not only the expression of his misogyny, but they also fulfill a crucial function in his theory of justice: marriage, which presupposes the superiority of men over women, is the original institution without which human dignity would end in a war of everyone against everyone. The fundamental inequality between women and men, which is a condition of their complementarity and is sanctified by marriage, is the only way for a society in which men are free and equal to emerge.

Julia Christ, Durkheim and the debate on mutual consent divorce. For a joint liberation of men and women

Durkheim’s reasons for opposing the reinstatement of mutual consent divorce cannot be dismissed as a lack of interest in the cause of women: the institution of personhood is at stake. While the sexual division of labor within the married couple has this instituting virtue and while the institution of marriage protects the partners, in Durkheim’s time this is not yet the case for the division of social labor. This circumstance affects men’s sexuality, causing them particular suffering, while women are not affected by it. Prohibiting them from getting divorced seems to be a requirement of social justice as long as the division of labor remains anomic and/or does not include women. Durkheim’s analyses represent a new conceptualization of the term “modern freedom,” which still allows us to shed light on the demands for an extension of the marital state.